What has plagued other timing systems and frustrated coaches and athletes is the problem of false switch changes being registered interfering with reliable timing of events. The false signals arise from two sources:

The Kinematic Measurement System (KMS) is a computerised system for testing and training athletes and patients. The KMS comes with two options for timing lights.

1. Switch Bounce - this problem is usually confined to tests involving a contact mat or some other type of mechanical switch. When the switch is depressed or released it might actually bounce producing additional switch change signals. The problem is not so evident in timing lights because most systems use transistors to act as the switch and have no mechanical parts.

2. False triggers - probably the most frustrating aspect of timing speed or agility tests are due to multiple switch changes being registered as parts of the body break the light beams as the athlete passes. For example imagine the scenario in the figure below. 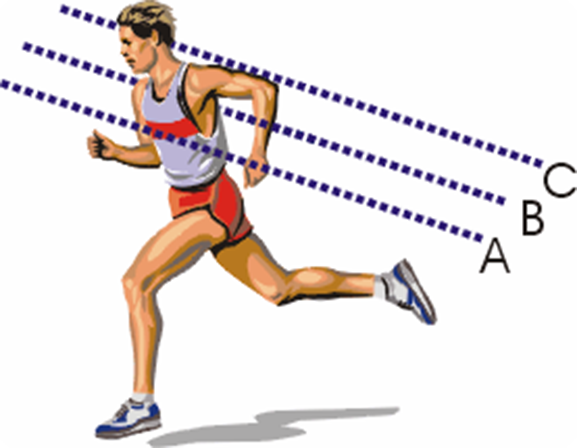 A switch close will be registered when the runner passes through the light beam at 'A'. It will then open briefly at 'B' but then close again as the trailing arm breaks the beam. The result is a false switch change which most timing systems would interpret as the runner passing through the next light gate.

3. There have been attempts to overcome the problem of false triggers by using two light beams (about 30cm apart) per gate and requiring that both be broken at the same time to register a switch change. This is a hardware solution which works reasonably well in most situations because it assumes that the trunk of the athlete must be passing through the gate to break both beams. The problem is the expense, additional electronics, and power demands required to operate two light beams at every gate.

The Kinematic Measurement System overcomes both false triggers and switch bounce by using the processing power of the modern PC running Windows to intelligently analyze the switch signals and determine the most representative times for ON and OFF switch changes. When false signal processing is enabled a minimum delay between consecutive ON signals can be set. For sprinting or agility tests this should be the absolute minimum time it would take the subject to move between any two consecutive gates. This is usually at least 1000ms. However, for tests involving contact mats and the contact time, jumping, or gait analysis tests a minimum delay of 100ms or less should be used. If the time between consecutive ON signals is less than the minimum then the times are adjusted in one of five ways: First ON, Second ON, Average ON, Longest ON, and Skip false switch change. The following figure details how these are determined: 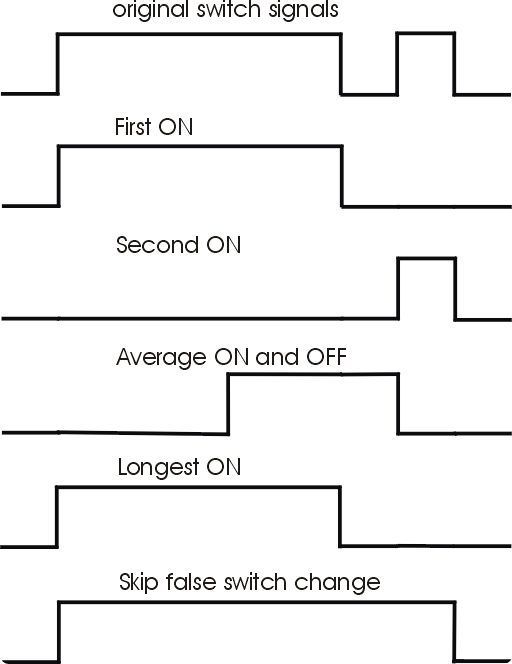 • First ON - The first ON signal and subsequent OFF is recorded as the representative timings and the second ON/OFF combination is ignored.

A good option for the fast feet and first step quickness tests.

• Second ON - The second ON signal and subsequent OFF is recorded as the representative timings and the first ON/OFF combination is ignored.

This option could be used when timing sprints using light gates as the average of the ON times will be recorded as the gate time.

• Longest ON - The signal which had the longest time between the ON and subsequent OFF signal is recorded as the representative timings and the other ON/OFF combination is ignored.

This is the recommended option for timing sprints using light gates as the trunk passing through the beam should produce the longest ON signal.

• Skip false switch change - The middle OFF and subsequent ON signals are assumed to be a bounce or false signal and are removed.

This is possibly the best option for any mat tests as it will effectively remove any switch bounces that occur both on landing and takeoff. Therefore it is recommended that this option be used for any of the jump tests and the contact time test.